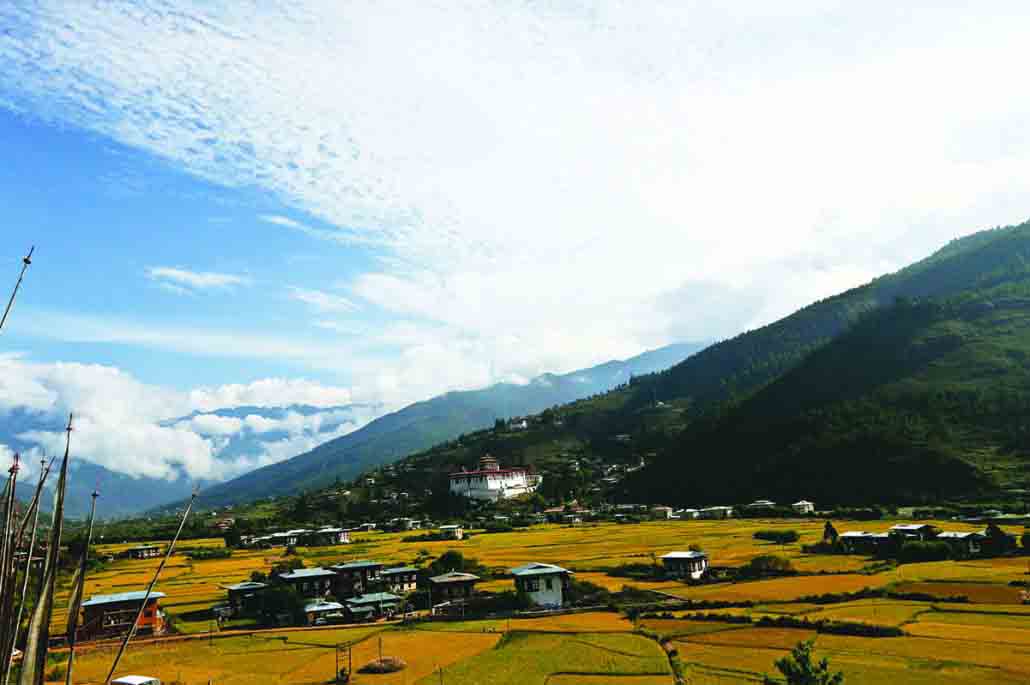 Considered the Rice Bowl of Bhutan with its annual bounties of paddy (staple red rice), the wide and fertile Paro valley has both an ancient and a modern face. It is home to some of the most revered temples in the kingdom and also boasts Bhutan’s only international airport.

Perhaps more importantly, Paro is known for its wealth of sacred temples and monasteries. Hanging precariously on the face of a 3000ft rocky cliff, Taktsang (Tiger’s Lair) monastery is world famous and a popular tourist destination. One of the most impressive and well-known fortresses in Bhutan is Rinpung Dzong, meaning “Fortress on a Heap of Jewels”. Standing on a scenic knoll at one end of Paro valley, the ruins of the Drukgyel Dzong or “Fortress of the Victorious Drukpas” is a reminder of the numerous Tibetan attempts to invade Bhutan.

The unusual and circular Dungtse Lhakhang, reminiscent of the Zhanag, or black hat worn by Bhutanese Black Hat dancers, was built by the great “Builder of Iron Chain Bridges” Drupthob Thangtong Gyalpo in 1433. Kyichu Lhakhang is one of the 108 temples built by Tibetan King Songtsen Gampo in 659 AD. The valley boasts of the National Museum, the premier repository of Bhutanese history in the kingdom.

The five-day Paro festival is one of the biggest religious celebrations of the Bhutanese calendar year. Mask dances are performed to illustrate Buddhist moral tales and the lives of various Buddhist masters. During the final day of the festival, a popular folk dance called the Wochubi Zhey commemorates historical events. Smaller ceremonies are also conducted throughout the year to honor various guardian deities.

Tourism has brought a boom to Paro. A more positive impact of tourism in the region has been the revival of old crafts such as pottery, scroll painting, bootmaking, and other “living arts” that were previously threatened by modernization.