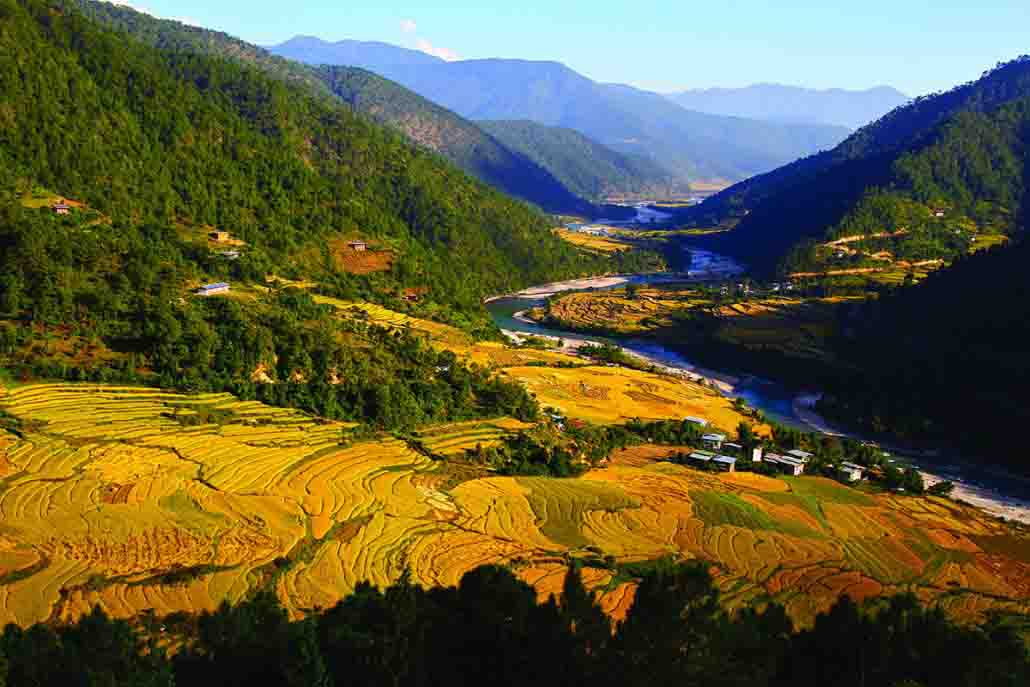 This is a historical district. Not only was it the capital of ancient Bhutan, it was the place where the first hereditary king of Bhutan was unanimously elected in 1907. The first session of the kingdom’s National Assembly was held in the magnificent Punakha Dzong or fortress flanked by the “male” and “female” rivers.

The district boasts of several ancient temples that constitute some of the most significant spiritual treasures of Bhutan. The Talo Goemba was the home and birthplace of the “speech incarnation” of Bhutan’s saint founder, the Zhabdrung. Today, Punakha’s significance to the Bhutanese nation is emphasized by the fact that it remains the winter residence of the national clergy and the Chief Abbot of Buddhist Bhutan.

With an immense wealth of flora and fauna, parts of the Jigme Dorji Wangchuck National Park fall within its boundaries. Punakha is also famous for its hot springs and the gentle terraces that line its slopes are a treat to the eyes.

The district has warm and humid summers, with cool winters frequented by the highlanders of Laya and Lunana in Gasa district who migrate down the mountains.

Among the festivals in the region, Punakha Dromchoe, honoring the guardian deity of Bhutan, includes colorful re-enactments of the numerous battles Bhutan fought with Tibetan marauders. Bringing history to life, Pazaps, or militiamen in full traditional gear, play out mock battles with men dressed in Tibetan garb. Rafting on the Punakha’s Mochu River provides tourists a unique opportunity to enjoy the valley from a different perspective