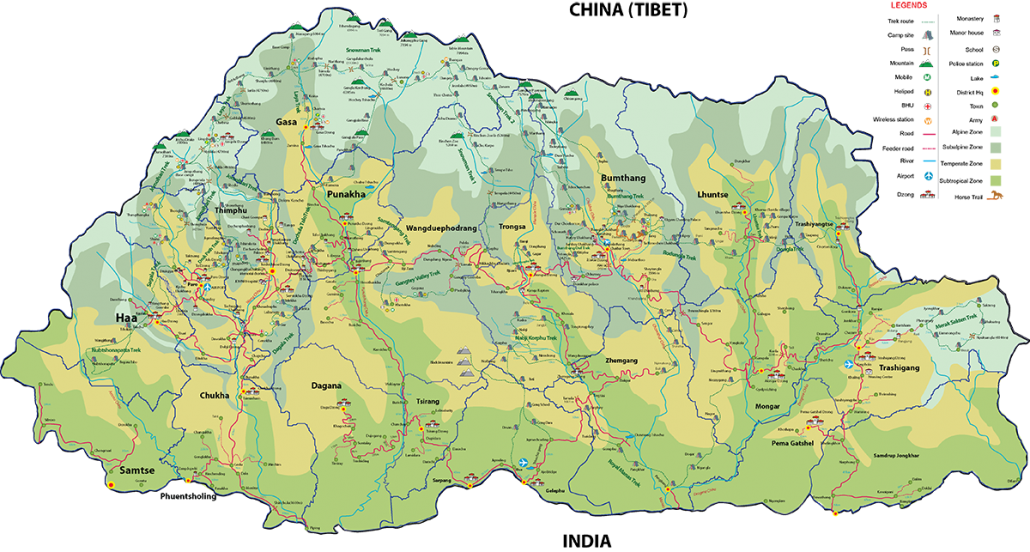 Hidden deep in the folds of the great Himalaya mountains for years, Bhutan developed its own civilisation. The population of about 700,000 people, living in close harmony with nature, evolved a unique identity, derived largely from a rich religious and cultural heritage.

Bhutan is becoming increasingly known for its pure practice of Mahayana Buddhism in the Tantric form, its untouched culture, its pristine ecology and wildlife, and the unparalleled scenic beauty of its majestic peaks and lush valleys. It is still, in many ways, a magical kingdom of the past.

It is a matter of great pride to the Bhutanese that their small kingdom was never colonised. Its ancient history, which is a mixture of the oral tradition and classical literature, tells of a largely self-sufficient population which had limited contact with the outside world until the turn of the century.

In the eight century Guru Rimpoche (Padmasambhava), established several sacred religious sites which are important places of pilgrimage for the Buddhist world today. Over the years many other saints and religious figures helped shape Bhutan’s history and develop its religion.

Perhaps the most dynamic era in Bhutanese history came in the 17th century with the arrival, in 1616, of Zhabdrung Ngawang Namgyal, the great leader of the Drukpa school of Mahayana Buddhism. He unified the country and established the foundations for national governance and the Bhutanese identity This system took Bhutan to the turn of the 19th century, until the birth of the Wangchuck dynasty and establishment of hereditary Monarchy. In 1907, a historic Assembly of the clergy, the official administration, and the people unanimously elected Gongsar Ugen Wangchuck as the first hereditary King of Bhutan.